Mystember resembles a horse made out of rocks and lava. It has a brownish-grey body with dark brown rocks attached to its back, while it has a light brown underbelly and a mane that is made out of lava spilling out of its head. It has amber eyes and its snout is colored tan. It has two dark oval marks resembling coal under its eye. Its hooves are dark brown rocks, and its legs are dotted with two brown marks on the front, and three on the hind legs.

"An angered Mystember can stomp its heavy hooves hard enough to cause a small earthquake!"

It does not evolve from or into anything.

A Mystember appears in Bonfire Spire by itself or accompanying Emburn. A good place to look is the Garden Getaway where you fought Cebollini (after you defeat him) or in the Royal Kitchen just past the Throne Room. It can also be purchased at the Academy for 500 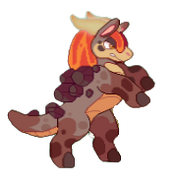