"Actually, since you're here, there IS something you could help me with, if you're up to the task."
This article needs version details. You can help the Prodigy Game Wiki by adding to it.
Contact a moderator when it's up to date!

"Magical beasts that have gone away..."
This page contains information about removed content that may or may not return in a future version of the game.

example
Muffins was the former boss of Shiverchill Mountains in Prodigy Math Game.

Muffins resembled an armored bipedal polar bear. Its shoulder-plates had blue ice crystals emerging from them.

His role was to be the boss of Shiverchill Mountains. 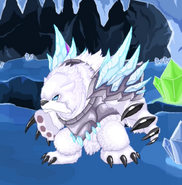