Embershed resembles a red dragon that breathes fire, with a red body and two large red wings with yellow-orange interiors. It has large beige layered plates lining its jaw to its underbelly, appearing to have two dull blue-black spikes sticking out of its right leg. Embershed has amber-red colored eyes and appears to have dull black, purple, or dark red claws. Its tail appears to fade into a dark purple or red, as well as having flames wave off of it. It has dark red spots on its back and legs and its back leg claws are dark red. Unlike most pets, Embershed doesn't blink its eyes.

"Embersheds are rare in the mountains, as they spend most of their lives in caves, reading and perfecting multiple languages."

This pet can be encountered in Bonfire Spire's Garden Getaway along with Burnewt, in the Royal Kitchen, or Volcanic Sanctum. It can also be evolved from Infernewt. 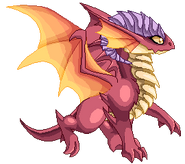 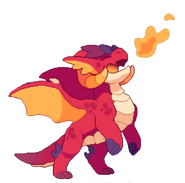