"Actually, since you're here, there IS something you could help me with, if you're up to the task."
This article needs version details. You can help the Prodigy Game Wiki by adding to it.
Contact a moderator when it's up to date!

52
Draconyx Gear is an outfit in Prodigy Math

Draconyx Gear resembles a spiky medieval-type armor that is red and has a yellowish-orange fire emblem on its chest. The outfit has spiked shoulder pads fitted with a type of silver metal. It seems to have a red ruby or gem embedded into it. The top of the outfit has an iron and a dragon-type design. It is mostly red, resembling the fire element of the wand and thus the gear. Its gauntlets are pointed and also seem to have metal on them. There are also wings, once you wear it, and it looks somewhat demonic in a way.

"Worn by ancient battle wizards, this gear seems to fit you perfectly, almost as if you were meant to wear it."

This outfit can be bought from the Summerfest Shop for 50

Sand Dollars. This used to be the hardest 8 Heart Bonus outfit to obtain but is now a rather common item, about as rare as the Black Fang Coat. The player could also obtain this by doing the old arena. 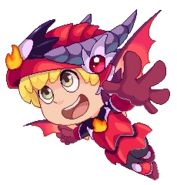