Buy during Starlight Festival for 50

Charfoal resembles a small red horse with jade eyes and large brown, red eyelashes. It has a curly, yellow tail that is shaded with hints of orange. A bright, orange mane hangs onto the top of its head. An orange-yellow underbelly is located underneath its body, while brown hooves are located at the bottom of its feet.

"Charfoals are many wizards' favorite pets to cuddle during the winter. Warm and cozy!"

Charfoal in the Meet the Starters video series 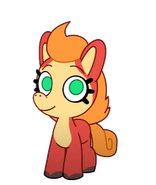