Acromi resembles a great horned owl. It has two small yellow lightning bolt emblems for eyebrows and one big one on its chest. It appears to have a fluffy white ruffled collar that resembles a beard. It has a cream-colored underbelly, wings, brown talons that are yellowish-orange at the tips, and dark amber eyes. It has two horn-like feathers on its head, which are lavender and dark purple. The tips of the wings are a light purple.

"The eyes of an Acromi are so big and bright, that they are often mistaken for stars in the night."

Storm element is weak against: 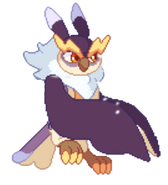